One of the biggest challenges facing research is its lack of diversity. In most countries and many disciplines, researchers are not representative of the populations from which they are drawn. This is true of a number of characteristics: sex, gender, ethnicity, disability and socio-economic background. This is a problem not only because of reasons of justice and equality, but also because it means research is not always informed by as diverse an array of backgrounds and perspectives as it needs to be.

While there is much support for enhancing the diversity of the research base, when it comes to sex and gender there is sometimes the suggestion that differences in representation within the research system reflect actual sex-related differences in cognitive abilities and aptitudes. Infamously, this position was articulated by Lawrence Summers, the then-president of Harvard in a controversial speech in 2005. 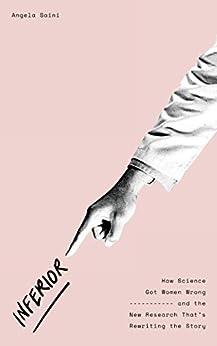 In her book Inferior: How Science Got Women Wrong – and the New Research That’s Rewriting The Story Angela Saini tackles this question head-on. The book is an authoritative review of the history of research into sex differences, and a clear summary of the state of current evidence. With sharp analysis and clear writing, Saini demonstrates that the evidence for substantial differences is weak or non-existent, and also explains where areas of controversy or uncertainty remain. I would strongly recommend this book to anyone (and am grateful to Stephen Curry), whose recommendation of it on Twitter led me to it in the first place).

One the most interesting aspects of Inferior for me is the picture it paints of the role of male scientists in research into sex differences. In keeping with much evidence from the sociology of science, it is clear that the trajectory of the research and the conclusions drawn from it was very influenced by the lack of diversity in the researcher population. The questions that were asked, and the interpretation of results were all influenced by the perceptions and prejudices that researchers brought to their work. As Saini memorably concludes:

As I’ve learned, science is far from perfect. That’s not the fault of the method, but of ourselves. We imperfect creatures crash into its home and dirty its carpets with our feet. We throw our weight around when we should instead be its respectful guests.

She also observes that the tendency to be influenced in this way is especially acute in topics where we have direct personal experience:

Gender is one of those subjects that everyone has an opinion on – and, of course, of which everyone has direct experience. Perhaps unsurprisingly, then, there’s sometimes a lack of objectivity in the field.

This is an important general point. We need to be especially cautious in examining research findings in areas where researchers themselves have direct experience, strong opinions or the research outcomes might influence their professional practice. This includes the question of diversity in the research workforce, as well as, of course, all other aspects of research and Higher Education policy.

Earlier today I gave a keynote presentation at the 10th anniversary LIS-bibliometrics conference. This post is a summary of the argument ...

The size and complexity of the research literature is growing rapidly, and this trend has been evident for a number of years. More nation...

CRediT Check – Should we welcome tools to differentiate the contributions made to academic papers? Writing on the LSE Impact Blog, Lizzi...

Research culture is one of the hot topics in research policy. There is general agreement that things are not right in the culture of rese...

Expanding ideas of excellence in research

In November I attended a 'Séance de Réflexion' organised by the Swiss National Science Foundation (SNSF) on the topic of research excelle...

This post was originally published on the HEFCE blog on 4 July 2016 (archived copy). "culture eats strategy for breakfast" — Attribut...

In 1962, Thomas Kuhn's book, The Structure of Scientific Revolutions, set down an central notion in the study of research, the idea that ...

This piece in Nature by Michele Pagano has an interesting take on the effect of increasing research funding: The infusion of funds in...

© 2021 Steven Hill. Unless otherwise stated, this work is licensed under a Creative Commons Attribution 4.0 International License.